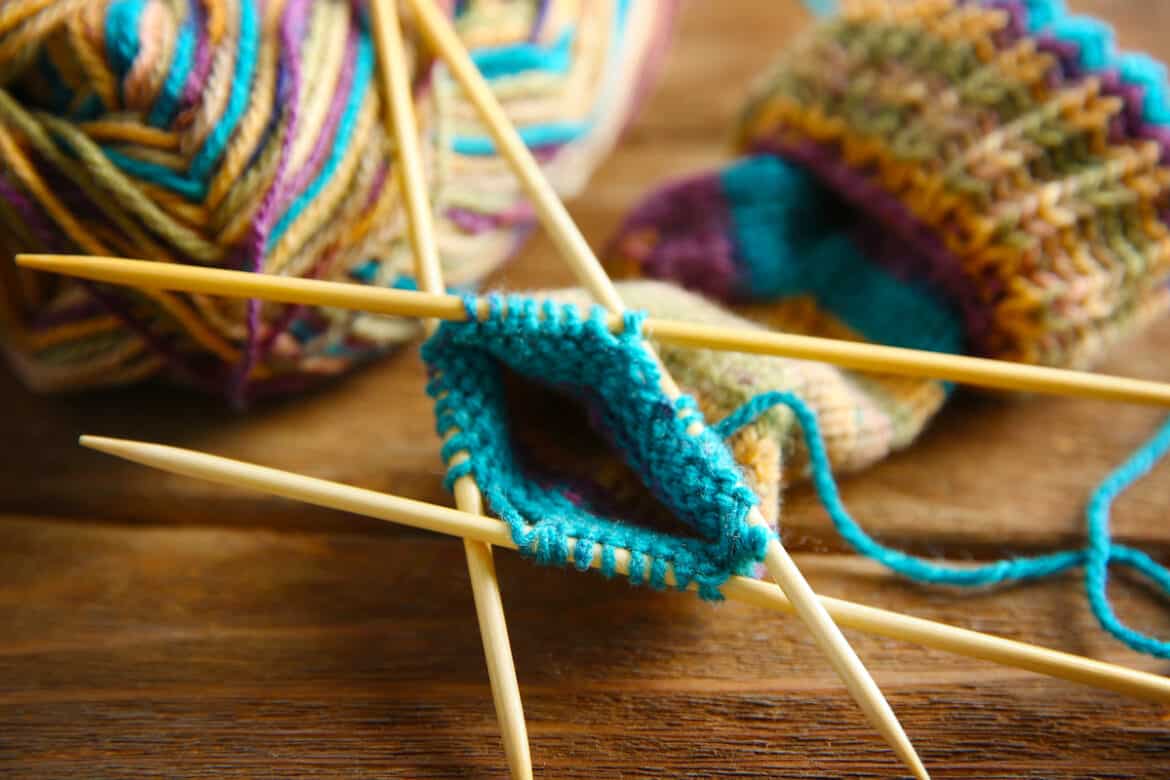 If you have already mastered knitting a flat piece by going back and forth, then the next natural step to “level up” your knitting skills would be learning to knit in the round.

Knitting in the round allows you to create one seamless loop by joining the end of one row with the beginning of the next row.

This technique allows you to make socks, hats, and sweaters in various sizes with little to no sewing required. Mastering knitting in the round will allow you to work on a wider range of projects and expand your knitting collection.

In this article, we will provide you with the ultimate guide to knitting in the round to help you get started on your first project using this technique.

Knitting in the Round – What to Know First

Knitting in the round may seem confusing at first, especially when you first learn how to join the round – it can be difficult to keep the stitches straight without twisting the row.

However, when you master the skills, you will probably prefer knitting in the round over knitting a flat garment. This is simply because you don’t have to switch needles or adjust your stitches so much compared to knitting a flat piece.

You will knit in one continuous loop, starting by connecting the end of the last row with the beginning of the next row without turning to the other side. After establishing the first row, you don’t have to worry too much about twisting or adjusting your needles since the transition between the last row and a new row is quite seamless.

Avoiding Gaps When Knitting in the Round

When establishing the loop in the first round, if the transition is not smooth enough, you may see a noticeable gap between the end of the last row and the beginning of the next row.

There is a way to minimize this gap when you first establish the loop. Note that you can use these methods whether you are using DPNs or circular needles.

Here’s how to do it:

This method will allow you to combine two stitches while establishing a link between the end of the last row and the beginning of the new row so that no noticeable gap can be detected as you knit in the round.

How To Join in the Round on Circular Needles

Circular needles are knitting needles that have two straight needles at two ends, joined by a metal or plastic cord in the middle.

If you need to make smaller loops, you will need to use double-pointed needles or use the magic loop method, which we will cover below.

Here’s how to join in the round on circular needles:

How to Knit in the Round With Double-Pointed Needles

Double-pointed needles (DPNs) come in sets of four or five straight needles, each with two pointy ends. DPNs allow you to pick up stitches and knit with both ends of the needle.

DPNs are perfect for knitting small loops, too small to fit in the shortest circular needles. You can use DPNs to knit socks, mittens, or similarly small garments.

Here are a few tips to help you knit in the round with DPNs.

One issue you can have with using DPNs is the appearance of “ladders.”

Ladders are gaps that can happen between the stitches of two DPNs. When you transition from one DPN to another, you will need to pull the yarn tightly to reduce the appearance of ladders. You can also move stitches from one needle to the next one to minimize this effect.

Setting up the round with DPNs can seem daunting at first since there are so many needles that you have to figure out.

We suggest casting on using one “regular” straight needle first. This helps you make sure that you have the right number of stitches and an even distance between each stitch. You’ll also want to cast one additional stitch to establish a link between the beginning and end of the loop.

Transfer your stitches from the straight needle to the DPNs.

Insert the DPN purlwise and slip the stitch off the straight needle. When you have the right number of stitches on one DPN (in the previous example, 20 stitches), use another DPN to pick up the next 20 stitches, and so on.

When all of your stitches are transferred onto the DPNs, make sure that the stitches are not twisted. This is especially important on the end stitches on any DPN.

Then, start joining the round. Using the empty DPN that you have, knit the beginning of the round, making sure to pull the live yarn tightly so that the end of the cast-on row is tightly linked to the new row.

If you have cast on one extra stitch, you can pull the last stitch of the cast-on row over the stitch you just knitted in the new row to create a seamless link.

Then, you can continue knitting in the round, making sure to pull your yarn tightly when you switch needles to reduce the appearance of ladders.

When you have already established the round but need to reduce the circumference of the loop – like when you knit the crown of a hat or make decreases (reducing the number of stitches) to a sweater’s sleeve – you can transfer your stitches from circular needles to DPNs.

If you have an uneven number of stitches, that’s okay. 1 or 2 extra stitches on one needle versus another isn’t dire; just make sure the stitches are as equal as possible across your needles.

How to Transfer Stitches From Circular Needles to DPNs:

There are two ways to transfer stitches from circular needles to DPNs:

2. If you are a more advanced knitter, you can knit as you transfer stitches from circular needles to DPNs.

Repeat this step until you have successfully knitted all of the stitches from your circular needles. Then, you can start knitting in the round using your DPNs.

What is the Magic Loop Method in Knitting?

The magic loop method is an advanced knitting method that allows you to knit in the round to make circles of any length using a set of long circular needles.

So even when knitting socks or mittens, you can still use your circular needles to knit these small loops.

The magic loop method will relieve you of the constraints of small circular needles and DPNs. You’ll easily avoid the look of ladders because the transition from one needle to the other is quite seamless.

To knit using the magic loop method, you will need a set of long circular needles, at least 16 inches or so in length. This length will allow you to knit comfortably while not leaving a long cord hanging outside of the working area.

Here’s how to knit with a magic loop:

Here’s a helpful video from Very Pink Knits demonstrates how to get started on your project using a magic loop:

This method allows you to knit in one continuous loop with minimal effort. This is especially useful when you need to make small loops for socks and mittens. When you have mastered the magic loop method, you can be as creative as you like. You can make anything you can think of using just a set of circular needles.

How Do You Knit a Circle With Straight Needles?

If you are interested in finding out more, there are a lot of free patterns out there that show you to knit a perfect circle using only straight needles.

Check out the free pattern here

When you knit a circle using straight needles, you will need to sew the cast-on edge and the cast-off edge together to close the circle.

Some knitters do not prefer this method because of this very reason. However, if you only have straight needles and want to make a simple circle, you can explore this pattern to test your skills.

Up Next: 9 Best Knitting Needles For Beginners

Gemstones Vs Crystals – What’s The Difference?

How To Shrink Socks

How To Fix Baggy Crotch In Jeans

How To Sew Elastic And Ribbon On Pointe...

Can You Tie Dye Microfiber?