How To Sew Without A Needle 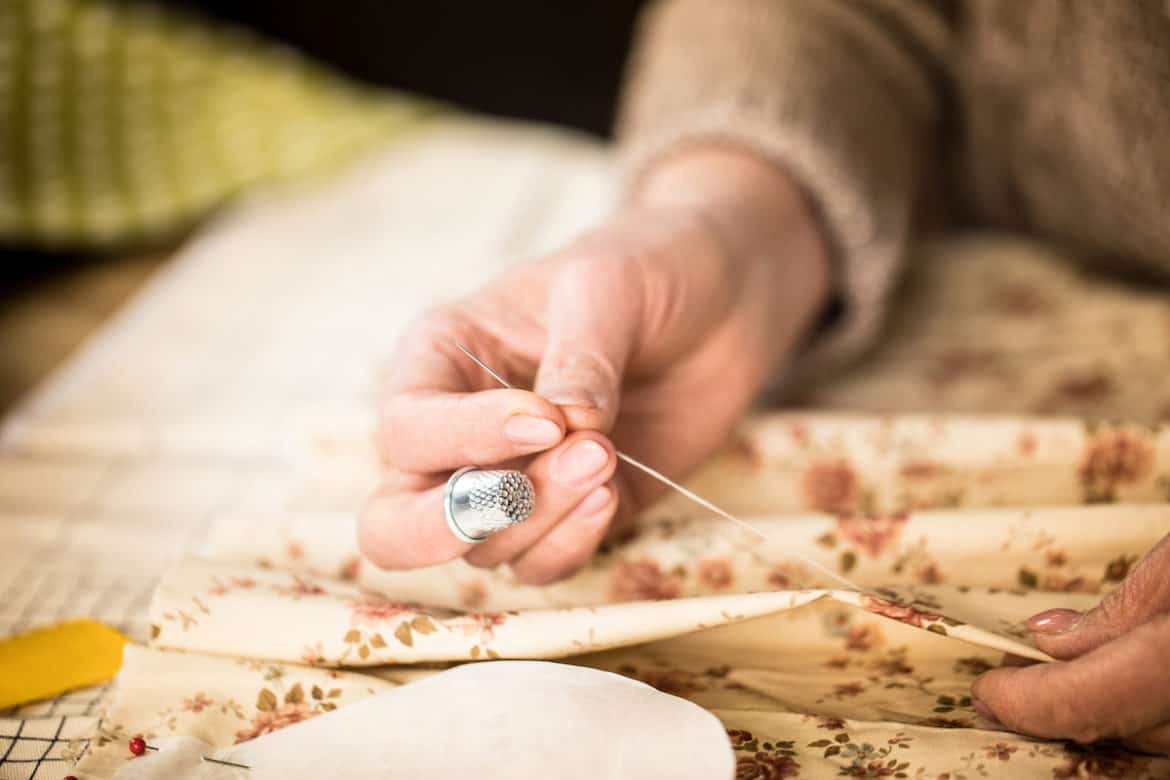 Contrary to what most people might think, it is actually possible to sew without using a needle.

The definition of sewing is the connection of two items – usually fabrics – with the use of a third material.

So how exactly can you sew without a needle? You can use a similar replacement such as a nail, a chopstick, a pencil, or an adhesive agent like glue or fusible bonding tape.

Whatever your reason for sewing without a needle, it’s a useful skill to be able to sew in a variety of ways. Whether it’s using a sewing machine, the traditional thread and needle, or without a needle altogether, which is what we are aiming to answer for you in this article, so keep reading!

What You Need to Sew Without A Needle

It’s a good idea to get comfortable with the idea of using adhesive agents to help in your sewing.

As well as potentially saving you some time, it is a great alternative to the thread and needle, and can make you better equipped to deal with whatever the sewing situation in front of you.

This is a fun option for non-needle sewing, since you’ll get to choose your replacement using your imagination.

Items to Replace a Needle

The main requirement is that it’s something thin, small, and of course, very sharp.

With that said, let’s take a look at some creative options, and assess their potential as replacement sewing needles.

Of course, one of the most similar items to a nail that probably comes to mind is the humble nail. Short, sharp and fit for domestic use, you probably already have some of these lying around the house if you’re used to doing DIY projects.

To get the nail to the point at which it’s ready to be used as a sewing needle, you’ll have to do a few things first. You’ll have to round the tips out and file them down to an appropriate size.

Another requirement is that it’s a similar length to a needle for comfort of use, so anywhere in the range of 5-8 inches. Then, find some fabric and thread to practice with, and see how you like it. The great thing about using a nail is that it’s readily available and already sharp enough for the job.

A bizarre, yet functional alternative to the needle, chopsticks can actually make great sewing needles.

Of course, the downside of using chopsticks is that they are slightly stick and being made of wood, more likely to break when you’re working with them. However, they are super simple to transform into needles, since all you’ll need to do is sharpen them up by sanding down the tips.

As an extra bonus of using chopsticks as sewing needles, you can customize them however you want by wrapping patterned fabric around them or even painting them.

Yes, you read that right, pencils. If there’s an easier sewing needle replacement out there, I’ve yet to find it. After all, who doesn’t have a bunch of pencils at home or at work?

Like the chopsticks, pencils won’t stand up to a lot of pressure and can snap if you’re too rough with them. However, they’re so easy to get hold of, that this shouldn’t necessarily be a problem. All you’ll need to do to turn them into sewing needles is sharpen up the tips by sanding them and you should be good to go.

While it’s fun to try and find an alternative for your sewing needle, there’s probably a good chance you want a viable solution that you’ll be able to turn to whenever using a needle isn’t an option.

The main way to sew without using a needle is through the use of some sort of adhesive agent. Whether it’s glue, as we’re going to look at now, or tape which we’ll cover later, it’s good to stick to basics.

First, I want to share with you a great way to attach fabric to a garment of clothing or accessory through the use of hot glue. This method gives you a great excuse to whip out your hot glue gun and put it to good use. Certainly one of my personal favorite tools to use, the hot glue gun is super simple to get to grips with.

One thing to bear in mind as you’re applying glue to the fabric using your glue gun is to keep steady pressure.

This is something that’s made incredibly easy to do with the glue gun. Simply hold the nozzle where the glue comes out right up against the fabric of whatever you want to stick, and follow the line carefully. If you don’t have access to a hot glue gun though, you can just as easily use regular fabric glue to do the job.

The main strength of using glue as an alternative to a sewing needle is that you will create a strong seal for any fabric.

The downside though is that with glue you have to leave it plenty of time to set properly, otherwise the seal can be compromised and it won’t last as long. Also with glue you’ll want to make sure it is machine washable before you use it, so that it doesn’t come off the garment immediately after the first wash.

As opposed to bonding tape which we’ll look at next, glue is fine for clothes that can’t withstand heat as well as those that do. Which also means it’s the best option if you don’t have access to an iron at home. Whereas tape, due to the fact that it must be sealed on with an iron, requires that the garment can stand up to heat.

The best way to test out which material is best for you is to test them out on some fabric and see which you prefer. But so that you can make an informed decision using this guide, we’re going to take a look at tape as a needle alternative now.

Fusible bonding tape is, in my opinion, the other most viable alternative to using a needle.

Fusible bonding tape is useful in a range of situations, but really shines when it comes to connecting fabric and performing the role that a thread needle usually would.

In case you don’t know what fusible bonding tape is, it’s essentially regular tape, except with this one you’ll need to iron it down to create a secure bond. This is the option I would recommend to anyone who doesn’t like using glue.

Ideal for cotton, but also suitable for other fabrics, all you need to do is lay a strip of fusible bonding tape on the area you wish to stick, then iron over it to create the connection. Bear in mind, when you go to iron the tape, make sure you do it over the fabric so that you don’t cause any unnecessary damage to the iron.

Use a medium or high heat with your iron for the best results, using the steam function as well.

How To Use Fusible Bonding Tape

The method for sewing using fusible bonding tape is easy enough, but let’s go over it quickly to make sure.

First, you’re going to cut a strip of the tape to a similar length of the rip or tear. Then, place the tape over one side of the tear and pull the other edge of the tear up towards the tape. Remove the protective layer from the underside of the tape and then press the 2 edges together to seal the tear.

Now comes the part when you’ll need your iron. Go over the tape with the iron to secure the bond and create a more permanent seal. Finally, take a patch of fabric that you’ve cut to be slightly larger than the tear, and lay it on the tape. Iron the patch down to secure.

The best part about fusible bonding tape is that it can provide a simple and quick fix that no other solution can.

With sewing, there is often a long process involved, and with glue, you will have to wait a long while until it sets for it to be properly sealed. However, with fusible bonding tape, once you’ve laid it down, all you have to do is go over it with the iron and you will seal it permanently.

Next, fusible bonding tape is machine washable, meaning you won’t have any issues with it coming off in the wash. On the other hand, using fusible bonding tape assumes that the garment you are attempting to fix isn’t heat-sensitive, and can endure the high heat of an iron.

This means that some garments of clothing won’t be compatible with this tape.

The 3 Best Sergers For Swimwear