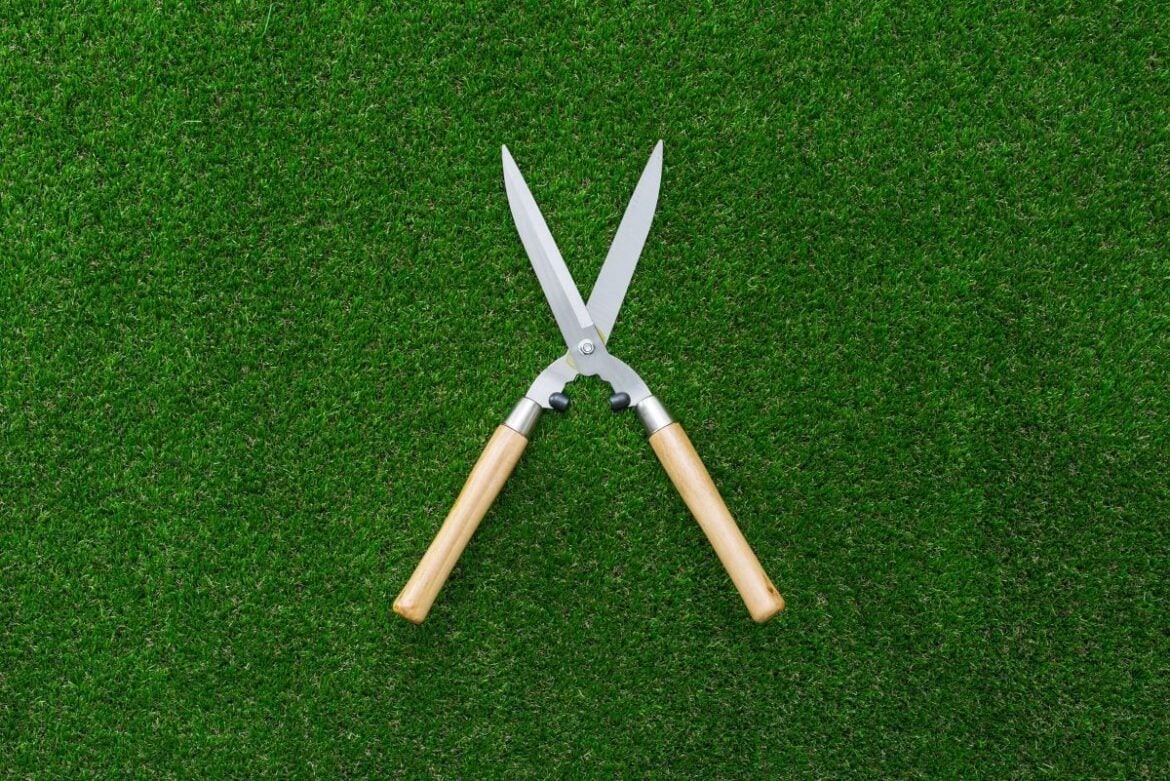 Scissors and shears are two distinct tools. Yet, the terms have been used synonymously for so long most people do not even know there is a difference.

The contrast makes them adaptable to specific applications, as we shall see later in the article. But first, let’s clearly define scissors and shears and outline their main differences.

Scissors are a manual cutting tool with two metal blades pivoted with a rivet or screw. Each of the blades is fitted with a handle that has a finger hole. It works by applying some effort to the handles to control the blades.

An outward force opens the blades into a crisscross so you can position material in between them. Applying an inward force closes the scissors, and the sharp blades slide across one another, cutting through the material.

Because both blades and handles are the usually same shape and size, scissors are usually symmetrical. The appearance is similar regardless of the side you are looking at them from.

The best thing about this symmetry is that these types of scissors are ambidextrous. You can hold them on either hand, left or right. However, some scissors are asymmetrical, designed to be more comfortable for your fingers, and some are also designed for left-handed people.

A pair of scissors is usually small with straight blades not exceeding 6 inches in length. They are also inexpensive and a cutting staple in every institution, whether in schools, workplaces, or homes.

The standard scissors are multipurpose cutting tools, though there are a few specialized scissors, like tailor’s scissors, made explicitly for cutting fabrics.

You should have separate scissors for fabric and non-fabric material. Using the same pair on both fabric and other materials like paper results in your blades dulling quickly.

Shears are also cutting tools. Like scissors, they have a pair of blades pivoted with a screw and two handles. You operate shears using the exact same mechanism as scissors. It requires the exertion of force on the handles to cut.

So then, how can you tell shears apart from scissors? We can view shears as the sister to scissors as they are so similar, yet entirely different, and here’s how to tell them apart.

Lengthwise, shears have longer blades and are more robust compared to scissors. The blades of shears are longer than 6 inches, thicker, and sharper. Shears are like heavy-duty scissors. For that reason, they cost more too.

Also, sheers slightly deviate from the design of a pair of scissors and are asymmetric. Since sheers are bigger, this feature allows you to utilize all your fingers, giving you better control. You are also able to apply more strength to cut thicker layers.

Because of their sharpness, sturdiness, and strength, shears are so versatile. They handle a range of light to weighty materials well, cutting them accurately and cleanly.

Sheers are, however, very job-specific. They are unlike scissors, where you can switch from cutting paper to ropes using the same scissors. Fabric shears will only cut fabric, and so on.

Which One Should You Choose – Scissors Or Shears?

Having defined scissors and shears and brought out their differences, you might still wonder, why does it matter? Aren’t they both cutting tools that work similarly?

While scissors and shears work the same way, knowing their differences helps you choose the right tool for the job. Their size and design make them best suited for specific applications. Let’s go over them.

The scissors are small and inexpensive yet crucial tools for a myriad of situations. You can easily accomplish basic cutting or light-duty cutting with a quality pair of scissors.

There are specialized scissors for different cutting needs. Though technically, one high quality pair, like these craft scissors, cuts across various needs.

It comfortably cuts paper, threads, fabrics, cardboard, and tape, and can be used as office scissors, kitchen scissors, and sewing scissors.

The following are the different applications of scissors.

Whether in school or at home, a pair of craft scissors is a must-have for various crafts. They cut all types of paper, foil, cord, yarn, twine, fabric, clay, etc.

Decorative scissors are also used in crafting. These produce unique edges that are wavy or zigzag.

Gone are the days of using teeth as tools in the kitchen. Basic scissors have been adopted as the sanitary and acceptable option.

They are used to snip or cut open milk cartons, juice boxes, sachets, bags, and other food packaging material.

For fabric cuts, tailor’s scissors are the best tool for the job. Though small, they cut the fabric at short distances very well.

They are not an ideal tool for professional fabric cutting because the twin handles make your grip finicky. Also, it makes it impossible for the blade to be parallel to the countertop below, so the fabric doesn’t lay flat when cutting.

These two factors interfere with the accuracy of long cuts. However, the small frame of scissors and small sharp tip makes them highly portable. They are perfect for quick intricate snips, trims, and notches on curves and tight spaces.

They also come in handy for cutting things like fabric tape, velcro, threads, yarn, and interfacing.

We also have embroidery scissors. These are usually slender and cut off threads very close to the base in embroidery work. You can quickly identify them by their pointy tip and characteristic ornate handles.

There are specialized scissors for personal grooming, like trimming hair and nails. These scissors are delicate, with very narrow blades, and some feature a slight arc at the tip.

Surgical scissors, like grooming scissors, are very thin with a delicate frame. These cut soft tissue like skin or gauze and bandages.

Shears are bigger, sharper, and sturdier than scissors. They were precisely designed to cut thicker materials that would otherwise pose a challenge to a pair of scissors.

Notwithstanding, you cannot use the same shears across jobs as you do scissors.

Each application requires a specific pair of shears designed for it, and you can use one type of shear for a job other than what it is designed for.

Here are the different projects you can use shears for and the specific type of shear to execute it.

In sewing, the dressmaker’s shears are the ultimate tool for cutting lengths of fabric neatly and accurately. They have razor-sharp solid blades that effortlessly slice through layers of fabrics and cut even tough ones like denim, canvas, and leather.

The quality of the blades, plus the sturdy grasp, ensures you get a crisp and clean cut every time.

In addition, the distinctive bent handle allows the sewist to hold the blades parallel to the cutting table. When the shears can sit flush, it keeps the fabric down for a meticulous straight cut.

Another type of shears commonly used in sewing is pinking shears. This style is identifiable by its serrated blades. It cuts fabric with a zigzag edge.

It is mainly used when cutting fabric on the bias to combat fraying. The zigzag pattern could also be made as a decorative element.

Gardening shears are useful for pruning and trimming plants and hedges. This particular type of shears does not have finger holes but has straight handles instead.

Blade shears are typically used for hand-shearing animal fleece like sheep. However, they are getting less common as there are better and faster trimmers for the job today.

Kitchen shears are an indispensable tool in a busy kitchen. They are more effective than a knife in many cases, and the design range is vast.

They will chop herbs and vegetables, size down poultry and meat, slice bacon into strips, slice pizza, crack oyster shells, and prepare crab legs, shrimp, and other seafood, among other tasks.

Shears are also practical tools for metalwork. The type used for this application is known as metal shears, or more commonly, tin shears. They come in various sizes for industrial works and DIY metal crafts. These shears cut wires and metal sheets effortlessly and are helpful when making wire jewelry, metal tags etc.

Shears Vs Scissors, Which One Should You Buy?

From a crafting perspective, you need both scissors and shears if you are into garment construction, bag making, leatherwork, and other fabric-related handcraft.

The shears are a must-have for your primary cutting needs if you aim for professional results. The scissors being small will assist you in precision detailing and to cut anything else to help preserve the integrity of your shears.

For the other crafters working with paper, cords, yarn, and other soft materials, you may get away with just the scissors alone.

We hope the difference between scissors and shears has now come out clearly. Here’s a chart rounding up shears vs scissors.

7 Best Paints To Use On Shoes

How To Make Hair Conditioners To Sell

How Long Does It Take For Hot Glue...