Types Of Macramé Knots – The Basics And More 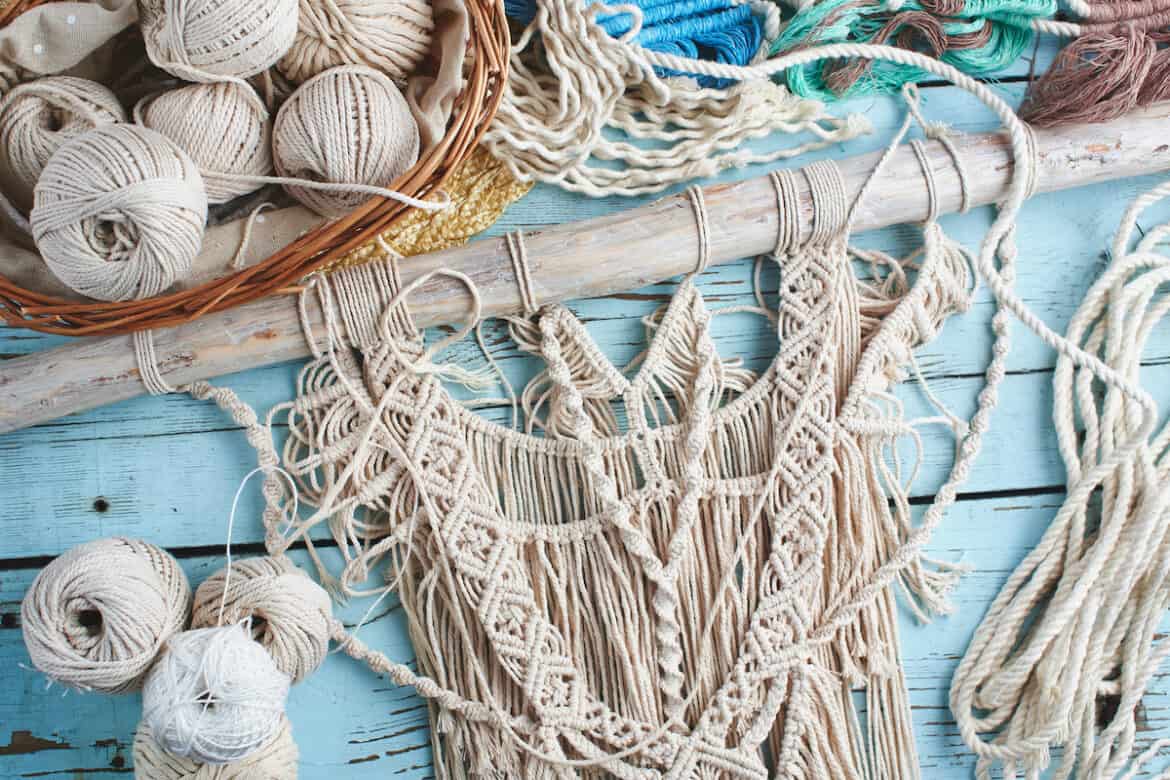 If you’ve ever seen a woven tapestry of rope hanging on the wall and thought, “I want to do that,” then you might be interested in the art of macramé.

Macramé has been around for centuries and is an art form that’s widely used to make not just art and decor, but useful household items! You can make a hanging plant holder, a belt, or even a keychain.

Although most of us learned to tie a knot on our shoelaces when we were young, the macramé art of tying intricate knots might seem a little intimidating to a beginner. So, you bought your cord, but now you don’t know where to start.

What are the different types of macramé knots? The types of macramé knots you need to know before you start are lark’s head knot, square knot, overhand knot, hitch knots (this is a group of knots), berry knot, and gathering knot. These will help you get used to tying knots before moving onto more complicated patterns.

We’ll review each of these knots to help you prepare for your macramé art.

With origins dating back to the 1200’s, macramé is the art of tying knots to create intricate patterns. While hanging tapestries and plant holders are the most recognized projects for macramé, there are many other things you can create!

Once you’ve chosen your favorite macrame kit, check out the best macrame knots for any project.

There are plenty of macramé knots out there to utilize for your project. They each serve a different purpose, either in design or functionality.

The knots we review below are the basic knots you need to know before you start the art of macramé.

The first knot we’ll review is the lark’s head knot because it’s probably the one you’ll use most often. This knot is commonly used to begin a work by securing the cord to a wooden dowel or metal hoop.

To create a lark’s head knot, take your length of rope and fold it in half, holding onto the looped bend and letting the edges dangle. Put the loop over the dowel, starting from the front and hanging it over the back.

To finish, simply pull the ends of the rope through the loop and tighten. You’ve now created a lark’s head knot and secured your macramé to your support.

Another variation is called the vertical lark’s head knot.

For a vertical lark’s head knot facing right, take the cord on the right and bend it in front of your left cord to make an “L” shape. Next, bring the end of that right cord behind and through your loop.

To finish, hold the right cord in that “L” shape once more, but this time you’ll make the “L” behind the left cord. Bring the end around the front of the cord, pull through the hole, and tighten. Now you have a vertical lark’s head knot!

The square knot is a common macramé knot used to create basic designs; it can also be used in more advanced patterns depending on where you choose to place it in your piece.

To tie a square knot, make sure you have 4 cords to start with. This will involve having two strands of cord and tying them separately in a lark’s head knot onto your base. From these two lark’s head knots, you should have 4 strands.

The overhand knot is one you’ve been tying your whole life and just didn’t know the name for it. Definitely the easiest, this knot is used for securing cords at the end to give them extra strength.

This knot is the base for tying your shoelaces. To begin, take a single strand of cord and lay one end over the other, forming a loop.

Next, bring the end of the cord (the one lying on top) behind the loop, then up and through the loop. Pull both ends to tighten, and now you have an overhand knot.

With this family of knots, there are too many to cover in detail. We’ll review the half and double half hitch knots in this article, but we’ve included links to videos which teach the other knots above.

To create a half hitch knot, you’ll need a series of lark’s head knots tied onto a base. You’ll be working across the cords, only using two strands at a time, referred to as your working cord and filler cord.

You’ll need to hold your cords tight and keep the tension for this knot to stay. It may look similar to an overhand knot when you first pull your working cord through the loop, so pull the cords until you start to see a horizontal loop on top of your filler cord.

For working the berry knot, you’ll need to master the square knot first. This will serve as the base for your berry knot.

You’ll need to work with 4 cords for this knot, just as with the square knot. To begin, tie 3 or 4 square knots. The number of square knots you create will determine how big your berry knot will end up being.

After working your square knots, take the two center cords and bring them up through the center at the top of your first square knot. If there isn’t enough room to loop them through, you tied your square knots too tight. Try pulling on the cords a little bit to loosen them.

Now, pull down on those two center cords. You’ll see the square knots roll up, forming your berry knot. To secure the end and keep it from unrolling, tie a half knot under the berry knot.

The gathering knot is also sometimes referred to as the wrapping knot. This knot is intended to tie all the strands of your piece together at the end. You don’t always have to use a gathering knot to end your piece, but it’s one of the most popular and basic ending knots.

To begin, grab a separate length of cord not already tied to your project. This will be your knotting cord. The cords you used in your project will be referred to as the knot-bearing cords.

Fold a loop near the end of the knotting cord and place it on top of the knot-bearing cords with the loop pointing up.

While holding the loop in place, wrap the long end of the knotting cord around the knot-bearing cords several times. The more times you wrap it, the longer your gathering knot will be. Be sure to leave the top of the loop exposed above the wraps.

Cut off the exposed ends of the knotting cord, and you’re done! You’ve added the perfect finishing knot to end your macramé project.

Up Next: Best Large Hole Beads For Macramé

Acrylic Paint Thinner – What To Use And How To Do It

Can You Use Super Glue On Fabric?