How To Unravel Yarn – The Best Way 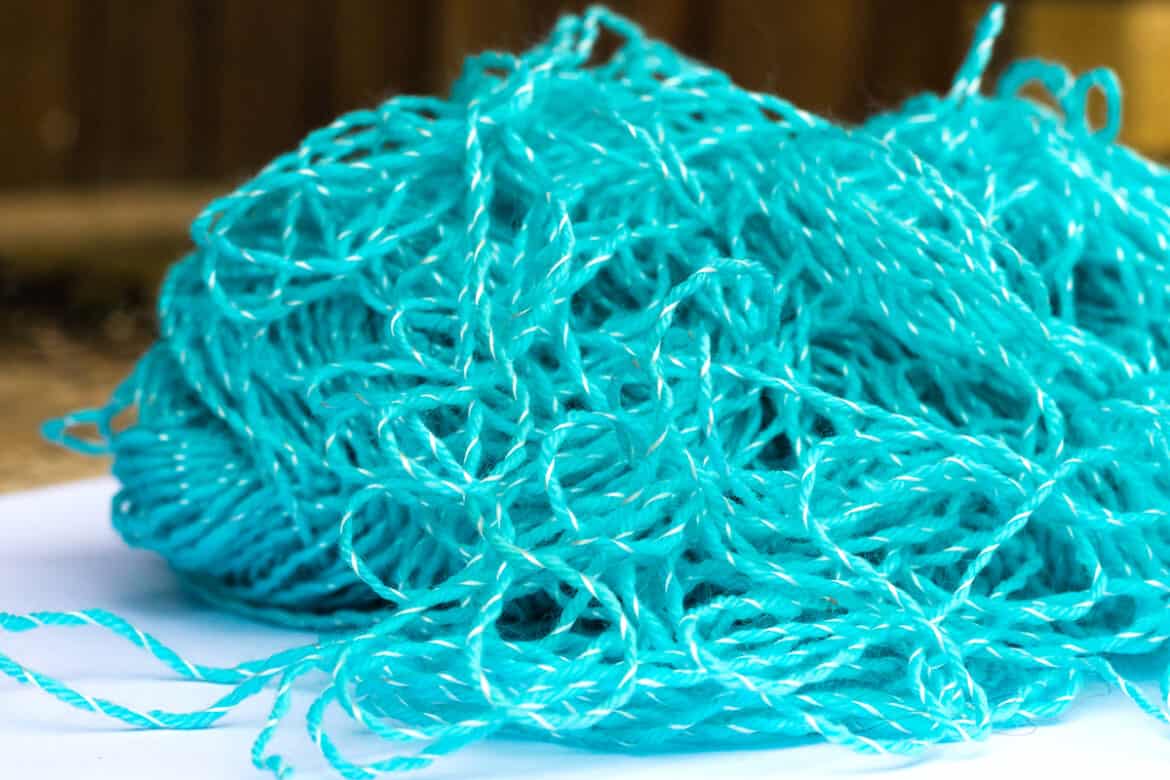 Knitting and crocheting are thought to be relaxing activities for people of all ages. If you just picked up any of these as a hobby, then you can expect some wonderful psychological benefits in addition to making pretty cozy things.

Unfortunately for newbies, such expectations get thwarted once yarn begins tangling and knotting, making a big ball of mess. It gets discouraging and equally frustrating trying to unwind several tufts of twisted strands of your favorite yarn.

Why does yarn tangle? Yarn can tangle for a myriad of reasons, but how it is unraveled from the skein/hank is almost always responsible.

So how do you unravel yarn? The best way to unravel a hank of yarn is to unfold it and place it on a yarn swift or around a chair. Secure one end and use the other to create a ball. For skeins, you can often knit/crochet straight from the center or outside ends without unraveling or use either end to make a ball.

What most new yarn crafters don’t know is that learning how to unravel yarn is just as important as the knitting or crocheting skill itself. Unwinding yarn correctly is a critical move that anyone who wants a sane time working with yarn should consider knowing.

As technical as the unwinding process might seem, it is never that hard. This post takes you through a step-by-step guide for unwinding a skein/hank of yarn successfully. Let’s get started!

How Do You Unroll a Skein of Yarn?

Before unraveling yarn, you must first understand the packaging. Yarn comes rolled in a skein or hank but rarely in a ball.

Many fail to distinguish the difference between the three because colors and textures are the greatest influencers of yarn buying decisions rather than the shape.

Typically, when a yarn gets rolled into a big donut shape and then intertwined to itself, it forms a hank. For the sake of knitting, the twisted bundle must be unrolled then wound into a ball or cake first to make it usable by deterring tangling.

One can either do it conventionally by hand or employing tools such as a yarn swift to unwind the hank, as we shall see how to do later.

Though a hank and skein are often used interchangeably to mean the same thing, a skein is where the yarn is loosely rolled and packed into an oblong-like form.

The best yarns have instructions on the label that indicate whether the skein is a pull-center bundle or can be knit from the outside and how to find the ends.

For this reason, they are the best option for novice and amateur knitters enthusiastic about getting into the craft already without the trouble of winding yarn into a ball.

Notwithstanding, the shape of the skeins will at some point get distorted as one proceeds using it. At this point, you may start noticing it getting more and more tangled as you go.

It is typical of most knitters to roll up the remaining bundle of the yarn into a ball. Others roll up portions of the yarn into balls as they go or per knitting session until the whole skein is used up.

Therefore, it looks like the winding of yarn into a ball is inevitable even with skeins. Or, if you have a yarn winder, you might end up winding your skein into a cake instead.

But the best yarn doesn’t always come in skeins alone but hanks too. With a hank, unrolling it is a whole different process. Let’s find out how.

Step-By-Step Instructions For Unwinding a Hank/Skein

Knitting or crocheting with a hank is not as straightforward as with yarn in a skein or cone. It must be wound into a ball (or cake) from its original form to make it easy to use.

So, why make and sell yarn in a hank in the first place and not have it in a ball or skein already?

You probably thinking whoever came up with hanks had something personal against knitters, but that couldn’t be further from the truth. A hank is made is made that way for valid reasons.

To wind tons of yarn into balls or skeins requires machinery which is only possible and profitable for mass-produced yarn. Artisanal yarn is made into hanks as most artisans do not invest in such industrial machinery and just pack up the yarn by hand.

In the same light, artisanal yarn is usually hand-dyed. It is much easier to dye yarn loosely packed in a hank, especially when dyeing sections in different colors.

So the next time you want to pick up a hank but the thought of winding it into a ball scares you, think of the beauty and quality of your handmade yarn.

Besides, the unwinding of yarn is said to be meditative. Also, it offers you an opportunity to understand and connect with your yarn better before committing to it.

That said, let us go straight to the steps of unwinding a hank the traditional way. We’ll go into using a yarn winder later.

Step 1: Remove any tags and unfold the hank of yarn.

The first thing to do is remove any tags or bands and untwist the hank to form a ring. Examine the entire loop to check for awry strands.

Often, the hank is secured with knots in a couple of places to keep the threads together. Once your hank is open, carefully cut off the knots holding the skein together.

Step 2: Put the skein loop around a chair.

Once you have prepared the hank for unwinding, it is now time to get to the real task. Place the circular hank around a chair to keep it in the same form suitable for unwinding.

Though this is the preferable home solution for unwinding, you could still place the loop on a flat surface and use your hands. Or if you have a friend or companion who doesn’t mind helping, you could make use of their hands held out apart.

Some people prefer to sit on the floor and place the loop around their bent knees or even their wide knees sitting cross-legged. It is really up to you what works, but the aim is to have the hank held in a loop.

However, putting the skein on a chair is probably the most comfortable option that will save you the time and hassle of unwinding. This also allows you to stand up in the middle if needed! One chair is enough, but if you could get two chairs with the top rails slightly apart, even better.

Step 3: Unwind around your fingers.

Once you spot where the hank of yarn ends or begins, put your two fingers together depending on how fast and tidy you want the process to go.

Take a moment to make sure the other end is secure, pulling it out and loosely tying it to another part of the chair, sitting on it, whatever works. If this end is not fixed somehow, your yarn could tangle.

Wind the yarn a few times around your fingers. Then you can remove them and switch the winding direction perpendicular to the initial wrap (winding around the middle of your looped yarn). Following the same pattern, alternate the direction you wind and continue the process until it forms a ball-like shape.

Wind the rest of the yarn around the ball until the whole hank is unwounded.

Note that it is not always a smooth flow. At times you may encounter twists. Do not be afraid to take the ball over and under strands.

Step 4: Place the ball into a yarn bowl.

Every knitter will attest that yarns can be a nuisance when not contained correctly.

The best way to keep the ball from bouncing around all over the place and getting dirty and messy while knitting is by putting it in a yarn bowl. You do not want to go back into the business of untangling. Or do you?

Immediately you break loose the balled yarn, place it on a yarn bowl and tie a thread on the curved spot located on the side of the bowl. Do the same when unwinding a skein from the outside once you find the end and are ready to knit.

Don’t have a yarn bowl? Ordinary household items can work just as well; an old tissue box, a baby wipes tin, or any tin with the main lid and a smaller opening at the top.

How to Unwind Yarn Using a Yarn Swift

Though many prefer conventionally doing the unwinding, some tools could make the process easier. If you are the kind that regularly works with yarns, you probably want to find a speedier alternative.

The best thing about these tools is that they are not crazy costly and are less labor-intensive. A yarn swift and a ball winder are popular tools that aid in the unwinding process and then turning yarn into balls or cakes.

The devices function by spinning. In the process, the skein or hank of yarn separates in a single, unwounded strand then gets wound into a ball.

Yarn swifts come in a variety of shapes and sizes, each working in the same manner. If you already have the tools, these are the general steps for unwinding yarn–but always follow the manufacturer’s instructions if they have another method.

Here’s how to unwind yarn with a swift:

Though many yarn stores do the unwinding for their customers, it is often worth it to buy a yarn swift regardless.

Unless you will cast-on immediately after winding the hank into a ball, unwinding at the purchase store is not advisable. The reason is that yarns lose their elasticity very fast when tightly curled in a yarn ball or cake. This further has a toll on your knitting outcome.

Up Next: How To Repair Unraveled Knitting

The Best Glue For Foam Boards

Polyester Flammability – How Does It Stand Up...

Is Cotton Stretchy? – Everything You Need To...

What Is Bottom Weight Fabric?

Backpack Strap Material – What To Use